White Bean Stew from the Balkan

Ingredients you need for your White Bean Stew

Where I originally come from the white bean is a classic ingredient. In the Bulgarian Cuisine there are few meals containing white beans and the bean soup is one of the most famous dishes. I have to say that similar to any other traditional meals all over the world that in Bulgaria too every housewife has her very own recipe.

White Bean stew is probably a strange name for some of you. Let’s say this way to cook white beans is very popular in the Balkan region. Every country has it’s traditional dish – like baked white beans (my favourite in Serbia) or the white bean soup from my home country Bulgaria. I called this dish a stew – it’s not the baked version, but it’s not a soup either because is a lot ticker… At my house this dish was prepared as a mix of the both, but I still prefer to call it a stew.

I love this dish so much but it took quite some time to find the perfect recipe… I had to experiment a lot to find just the right ingredients. But here it is! There’s probably no other recipe on the web that’s so simple and lazy to prepare…

As I mentioned every Bulgarian housewife has her own recipe for bean stew – that’s why I make no claim to win a lot of hearts with my version, but I believe it would be useful for those of you who are looking for something unpretentious and easy to make. Now that it’s translated, I believe it would become quite popular ?.

How to prepare this delicious White Bean Stew 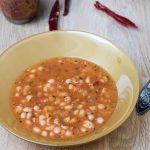 White Bean Stew from the Balkan
The best recipe for bean stew is the most successful one, that is really tasty and easy to make with just few ingredients.
Ingredients
Servings: portions
Units:
Instructions
Recipe Notes

* If the bean stew is too thin for your taste, you can thicken it with 1-2 tablespoons of wheat or corn flour.