Ingredients needed for your mushroom spinach and polenta soup

Many people believe that it’s impossible for a food to combine good taste, high nutritional values and little calories. However, mushrooms certainly meet all these conditions. They share characteristics with both the plant and animal kingdoms. What is special about them is that instead of plant starch they contain animal glycogen. Their nutritional properties are irreplaceable and beneficial. All types of mushrooms are rich in variety of nutrients and are low in calories.

They contain B-vitamins that are beneficial to the nervous and cardiovascular systems. They also contain vitamin D in the same amounts with those in butter. As we know, this vitamin strengthens the skeletal system and prevents rickets. Yellow and orange mushrooms (such as Chanterelle) are source of vitamin A (beta-carotene).
Mushrooms also contain valuable minerals, such as potassium (more than bananas), phosphorus (as in fish), iron, magnesium, copper, calcium, selenium, zinc, chromium, sulfur, iodine, etc.

They also have anti-cancer properties – the antioxidants such as selenium and the small amounts of vitamin E and others help fight harmful free radicals. One study suggests that regular consumption of mushrooms significantly reduces the risk of developing certain types of cancer, including mammary tumors and prostate cancer.

I recently rediscovered the polenta ( cornmeal or also known as kachamak in eastern Europe). The polenta could be made out of in different grains. Currently, the most popular one is made from cornmeal, which should not boil long – 2-3 minutes are enough. It is obtained by steam-treated and dried corn. Thank the few spoons of polenta the soup thickens, gains yellow color and corn flavour. We like it very much, but if you are unsure about the polenta, you can leave the soup clear.

How to prepare this king oyster mushroom spinach and polenta soup 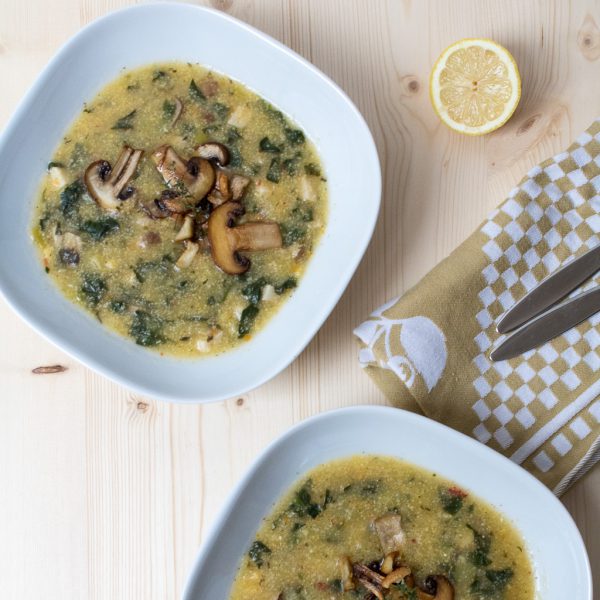