During the Easter fasts, a colleague asked me if I have tried vegan doner kebab as I didn’t eat animal products… I looked at her in surprise because I didn’t know what she was talking about. I later learned that there is a Turkish vegetarian establishment in Munich where the doner is vegan.

I immediately checked the place out and tried the doner sandwich… It turned out to be really tasty and I had a quite long conversation with owner. She told me how she woke up one morning after a very bad dream… and told her husband that she won’t eat meat anymore. She started looking for alternatives and came across the seitan, experimented a lot with it, and finally ended up in the wholesale business of vegan doner meat.

I was curious and wanted to know more about this product. Seitan is a food product made from wheat protein. It is produced by kneading wheat flour with water, washing away the starch and leaving only the gluten protein, which could be later cooked in various ways. The seitan is rich in protein and is used as a meat substitute and as an alternative to the soy-based meat substitutes like Tofu.

I really wanted to try and make something with seitan at home and I chose a recipe for a wine dish that is French and is usually cooked with chicken and lots of wine. I called my dish wine kebab, although it is a lot different from the traditional Bulgarian wine kebab. 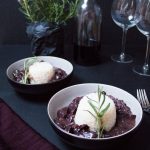