Ingredients you need for the vegan apple bread

The following products are added later:

Finding recipes of vegan sweets is always a challenge… Even though there are so many online vegan desserts, many of them are with substitute ingredients which sometimes can’t be found in the local store. This apple „bread“ (literal translation from German) is very successful. It remains a little dank and is wonderful for breakfast and also with coffee or tea.

The recipe I got from my almost mother-in-law, i.e. my boyfriend’s mother ?… The story started from there that my boyfriend wished to keep lent with me last year. This is found strange in Germany as to Germans „fasting“ means not eating sweets or not drinking alcohol.

Not consuming any animal products to Germans is a rarity… I exclude vegans as there are many of them in Germany but Germans are a carnivorous people like most Bulgarians too. So, despite this fact, the family approached me with respect and understanding. When we were visiting Andre’s family his mother had put effort and welcomed us with vegan sweets. That cake we ate for a weekend and the recipe became my absolut favorite. 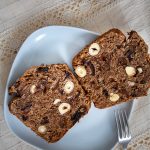 The dried fruit are selected according to your taste, for example, you can make it only with raisins.